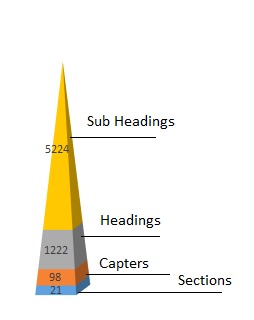 What is HSN Code?

The voice of HSN to you being an exporter is very familiar and common. This is super important for you to understand about HS in detail for your export and import assignments since this is an integral part of export and import and it plays a vital role in the process of exporting or importing.

If you are just learning how to do export, you might be very much concerned about it but you do not need to worry, I will explain it in this blog in such a simple way that you can become a master in it.

You need to read this blog till the end to become a master about HS code in just 5 minute read.

HSN means Harmonized System of Nomenclature that helps you to find out the class of goods and its tariff in case of export and import widely.

International harmonized code is used globally and acceptable worldwide. HS is a code generated by world customs organizations for each and every export product which is accepted and followed by the world.

This code has been developed by the World Customs Organization and it came into practice from 1st Jan 1988.

HS is mainly to collect tariff against the goods imported. The tariff before the HS code was simply collected on the list of products imported but it was effective till the list of goods was less. Once the list of import products became bigger, it became difficult to manage the collection of tariffs. The need of having a uniform name for the import goods for the global market arose.

The then system of collecting tariff for imported goods was only for the local government to collect their import duties and revenues but there was no humanized name internationally.

In the absence of HS code, there was a huge chance of conflict to classify the goods among various countries. It was a huge problem for the importer or exporter to assess the cost and viability of imports.

Then the need for naming goods in uniformity to be known and accepted by the world became essential.

In the 9th event of the International Statistical congresses held between 1853 and 1857, the idea for international tariff was explained and urged on its necessity to create a uniform code of each product to know their tariff easily.

During the meeting of International Commercial Congresses held in 1889 at Paris, the request was raised “Would it not be in the interest of all nations to adopt in their Customs tariffs and in their official statistics comparable classifications and uniform vocabularies?”

As a result, the draft for harmonized Systems became ready in 1931 and with multiple revisions, the final HS code came into existence on 1st jan 1988 with immediate effect.

As soon as it was announced, it was adopted and accepted by the various nations worldwide quickly and now it is benefiting more than 200 countries.

You can also read the whole story at this

The Level of HS

HS code has various levels and is divided into different segments.

The HSN consists of 2 digit, 4 digit, 6 digit and 8 digits. Let us understand what they are meant for

The four digit HSN code (9018) where the digit 18 indicates the heading for the medical instruments like Instruments and appliances used in medical, surgical, dental or veterinary sciences, incl. cinematography apparatus, other electro-medical apparatus and sight-testing instruments, n.e.s.

The six digit HSN code (901839). The digit 39 indicates the subheading by representing the exact products as “Needles, catheters, cannula and the like, used in medical, surgical, dental or veterinary sciences (excluding syringes, tubular metal needles and needles for sutures)

In India, the HS code stretches up to 8 digits and some time to 10 digits as per the description and the requirement.

For example, the HS code for I.V. Cannula which is a medical surgical item in India is 90183990 where up to the 6 digits are the same and further 2 more digits 90 is added to describe further extension and subheading of the medical equipment which is I.V .Cannula.

Depending on countries, they add extra 2 digit or 4 digit as per their requirement to describe their products in more detailed manner.

If you would be curious to know if the HS code is the same as in the international market. The answer is yes. India is in the agreement to follow the 6 digit HS code and on the top, it adds 2 digit more to fulfill its requirement.

The HS with 6 digits for a particular product will be the same and will match with HS used in other countries but it may differ in 8 level digit or 10 level digit in the last 2 digit or 4 digits.

India uses 8 digit HS code. The 2 digit on the top of 6 digit HS code are country based codes. India is one them that follow the same till 6 digit and uses extension of 2 digit as per its requirement.

HS code in US

HS code is known differently in some countries.

In Brazil, HS code is known as NCM

HSN code was developed by WCO (World Custom Organization) in 1988 with immediate effect of the application for the world.

It covers 5000 products assigning them a HS code that are exported or imported.

How many countries use HSN CODE?

Why is it important ?

This is universally recognized. It eases the job for importers, exporters, shipping line freight forwarders, insurers and custom departments to identify the products through the HS code hassle free. It helps in tariff collection as well as documentation.

It also helps importers to analyze the landing prices while buying a particular product from a particular. HS code can give you the details of what tariff or duty you need pay on your product imported from the exporter country.

The same HS code for one particular product may have different tariffs and it happens just because the agreement and relation between the countries; importer countries and exporter countries.

The HS code 842959 for backhoe loaders, Excavator and Wheel Loaders exported from India has different tariffs to different countries as can be seen in the below boxes.

What is the use of HSN Code?

There are below uses of the HS code:

1- To know Tariff. By HS code, you can identify the tariff of each country against a particular goods and it will help you a lot to make your decision in your exports or imports.

If the tariff against your goods in the buyer’s country is more, you will find the difficulty to export since the buyer calculates his landed prices after duty paid. If the buyer has the option to buy at the same price that you are quoting from another supplier of another country and the tariff against the goods is a bit lower, then the buyer may buy from another supplier and from you. This is the direct effect and you need to analyze as an exporter.

2- To collect import duties. For the custom department, it is an easy tool to know the tariff of the particular product and the collection of duties for it would be very easy.

3- Rules of Origin. Based on the HS code,

10- To ease the custom process

What is the relation of HSN code to other things?

HS code is being used in GST. The implementation of GST made it mandatory to mention HS code for the product sold.

HS code is a vital part for export and import. It is globally harmonized and accepted by 6 digit HS code.

Various countries like India, USA, UK, and Saudi Arabia add further 2 digit, 4 digit and 6 digit as per their requirement.

This code is internally humanized, logical and legal to identify goods and services mutually across the world. It is also periodically updated and communicated with all member countries.

There are 21 sections, 98 chapters and 5224 subheadings. More than 200 countries are members of HSN developed world Customs organizations (WCO).

The main purpose of the HS is to collect tariff on the goods imported from overseas.

If you need to know more about this, let me know through the comment, you will receive the answer.