Impact of GST on Export 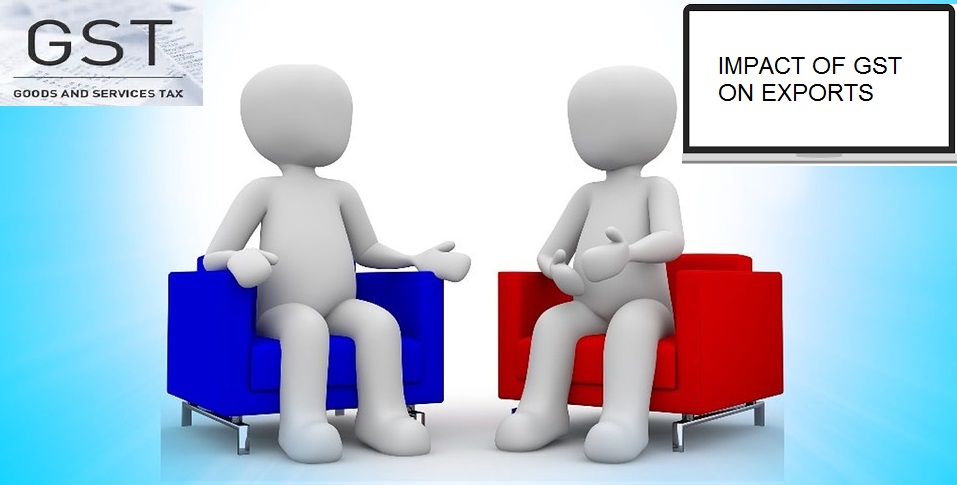 India’s exports sprouted at its swift pace in these recent years by 4.6% to $ 284.55 billion during the financial year 2016-17, regardless of the demonetisation ferry that actually decelerate domestic economic activity since November.

In March, exports had risen to a hoop from 26.6% to $28.23 billion after clocking a 16.5% jump in February, government surveys also showed that shipment of petroleum products jumped by 70% while engineering goods were up by 48%. India’s rank is 19th out of 30 top exporters worldwide shows the predominance of our export industry. That is why the impact of GST on Export industry is very noteworthy.

In simple words, we can say that GST is a tax that is levied on the consumption that is enforced on manufacture sale and consumption of goods & services at a national level. This kind of tax will remain same for all indirect tax levied by state and central government. It is a noteworthy consideration that after introduction of GST some taxes like income tax exports tax, corporate tax including capital gain tax will not be affected in any manner. GST will incorporate of:

The GST will able to assuage the cascading effect of the numerous taxes under the current system of tax. The prerequisite of input tax credit will be accessible to exporters even in the case of state taxes (SGST), which is basically not available to the exporters under the previous tax regime. In other words, one can say that, an input tax credit explicit that while paying tax on the output, one can accentuate the tax that has already been paid on inputs. Accordingly, one does not pay the same tax twice and alternative he can pay only the amount of tax on the value addition done.

This consideration by the government will bring down the costs of inputs and the amount of taxes paid by the exporters. Ultimately this will reduce costs and act as an incentive for the exporters.

One of the major benefit to the exporters is that by the incorporation of Central and State taxes in GST with intact set-off on input goods and services and curtailing out of Central Sales Tax (CST) will diminish the cost of locally manufactured goods and services resulting in huge margins to the exporters. As a result, the competitiveness of Indian goods and services in the international market will be increased and Indian exports will be encouraged. This kind of unanimity in tax rates will ultimately bring hassle- free experience across the country which ultimately helps in curtailing the compliance cost.

As far as the schemes are considered in India, the Merchandise Exports from India Scheme (MEIS) and the Services Exports from India Scheme (SEIS) that will sustain even after the execution of the GST. Subject to these schemes, exporters with a conclusive amount of turnover are furnished with duty credit scrips. These scrips will empower you for the exemption of duties paid on the import of raw materials. The amount of exemption is explicit as a percentage of the total turnover of the exporter. This will lead to increased benefits to the exporters.

As far as the duty drawback scheme is concerned, the major advantage of this scheme is that the exporters can easily get the refund of the customs and excise duties that are paid on the imported items. The GST legislation has specified the limitation on some of the imported items. So, inference can be drawn that you will get refund of the taxes paid on both imported as well as domestic inputs. This will ultimately benefit the small exporters who are placed in the remote areas where availability of raw material become a headache for these traders.

This factor will impact the industry in a constructive mode. The complaints of exporters have been meticulously handled, and the aggregate impact of these measures is going to fabricate Indian exports more competitive in the international markets, and give a jostle to the export business in India.

There are four different kinds of forms that are required to be submitted for the refund of the excise and sales tax and they are:

ARE 1- Form is a form that is submitted to the concerned department for the refund of imports but not it has been removed after the introduction of GST except in cases of commodities to which provisions of Central Excise Act would continue to be applicable.

As discussed earlier that after implementation of GST regime exports would be reckoned at zero-rated supply. Any person asking for the GST refund on exports have the following options namely:

(a) Any person can provide goods or services under any Undertaking or bond with such conditions as may be prescribed in the legislation, without payment of integrated tax and can hold refund of unexploited input tax credit; or

(b) Any person can provide goods or services or both, with such conditions, as may be described, by the payment of claim refund and taxes that are integrated to be paid on goods or services or both supplied, giving due consideration to the provisions that are mentioned in section 54 of the Central Goods and Services Tax Act or the rules provided in the Refund Rules, 2017.

There is a procedure to file refund that has been simply mentioned in the Refund Rules under GST. The exporter asking for the refund of IGST will have to file an application electronically through the Common Portal. Additionally, with the application one has to provide all the relevant documentary evidences as described in the said rules.

The shipping bill claimed by an exporter shall be considered as the application for the refund of integrated tax paid on the goods exported out of India.

Additionally, for both the options as mentioned above, the exporters have to furnish the details of GST invoice in the Shipping bill.